Read the guest article by Glenn Daigon on Vision Zero.

See the latest information on Safe Routes to School from a presentation given at an ACT meeting.

ACT launches a campaign to bring Vision Zero — the goal of redesigning roads for zero traffic fatalities among both drivers and pedestrians — to Montgomery County. In Sweden, where this concept originated, traffic deaths have been cut nearly in half. New York is now following, lowering speed limits city-wide as a first step.

We can start immediately with quick, inexpensive measures:

Then we must move on to rebuild our streets with safe sidewalks everywhere and road designs that promote driving at safe speeds.

Streets Should Be for Walking

Walking in Montgomery County is difficult and dangerous. Anyone on foot is a second-class citizen in a world of six-lane highways and strip malls.

For those who walk, the intolerable has come to seem normal. Sidewalks are narrow, drivers are distracted, and traffic moves at unsafe speeds. Deaths of pedestrians struck by motor vehicles occur as often here as homicides.

Built for Cars, Not for People

Walking is the safest, healthiest, and most environmentally sound way to move around, but the developers and traffic engineers who created our suburbs built for the car alone. Their model of automotive sprawl has failed, and Montgomery County has adopted a new goal of smart growth based on walking and transit. But the county's roadways are still stuck in the 1950s, designed with the overriding purpose of moving vehicles as fast as possible.

As the Montgomery County Dept. of Transportation sees the world, pedestrians are an obstacle to the movement of cars. At White Flint Metro, the county's so-called “pedestrian safety program” replaced a crosswalk with a wall, making pedestrians less safe so that cars could move faster. At Medical Center Metro, MCDOT tried to use federal pedestrian funding to build a highway underpass. And it refused to mark a crosswalk where children walk to Clarksburg Elementary School because doing so would “encourage pedestrians to cross at a less than optimal location” — meaning optimal for drivers, not pedestrians, because the children would hardly be crossing the street there if the location were not optimal for them.

It is long past time for a change in how we design and operate roadways. Streets should be for everyone, not just for people in cars.

The Right to Cross the Street

Now and then, MCDOT openly expresses its hostility to pedestrians. The department argued against plans to make Rockville Pike friendlier to pedestrians because the road's function is to “serve as a major artery to and from the district.”

But even when this attitude is not stated, it pervades the department's actions: 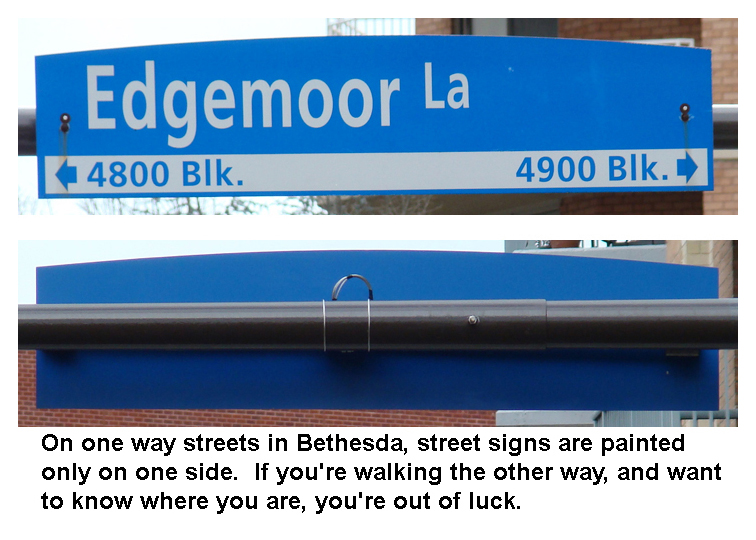 When citizens demand safer streets for walking, the traffic engineers often fall back on claims of superior expertise. For example, when they refuse to mark crosswalks, they cite research saying that marking crosswalks at highway intersections without traffic lights makes them less safe to cross. But their safety campaigns say just the opposite.

And the engineers ignore that research when it suggests actions that would impede the movement of cars. The studies show that wide lanes, slow traffic lights, right turns on red, and high speed limits all endanger pedestrians. Yet MCDOT continues to undermine pedestrian safety with its road designs and traffic signal timing.

Law enforcement takes a similarly anti-pedestrian approach. Montgomery County drivers rarely obey the law that requires them to yield to pedestrians in marked crosswalks, and few even know that they are required to yield at unmarked crosswalks. Yet in their “pedestrian safety initiative,” county police in the first half of 2013 cited 1850 pedestrians and only 90 drivers.

ACT held a public forum on Pedestrian Issues in the Upcounty in Germantown on Jan. 26. A crowd of 50 called for action on pedestrian safety.

ACT followed up on Feb. 4 with a letter to the county transportation department asking it to begin making our streets pedestrian-friendly by changing 4 policies and fixing 7 especially hard-to-walk places. A second letter asks whether the county intends to stop building pedestrian facilities on new roads.

Meanwhile, parents at Bethesda Elementary School joined together after a three-month-old child in a stroller was hit by a turning driver. They organized a petition drive for safer streets throughout downtown Bethesda.